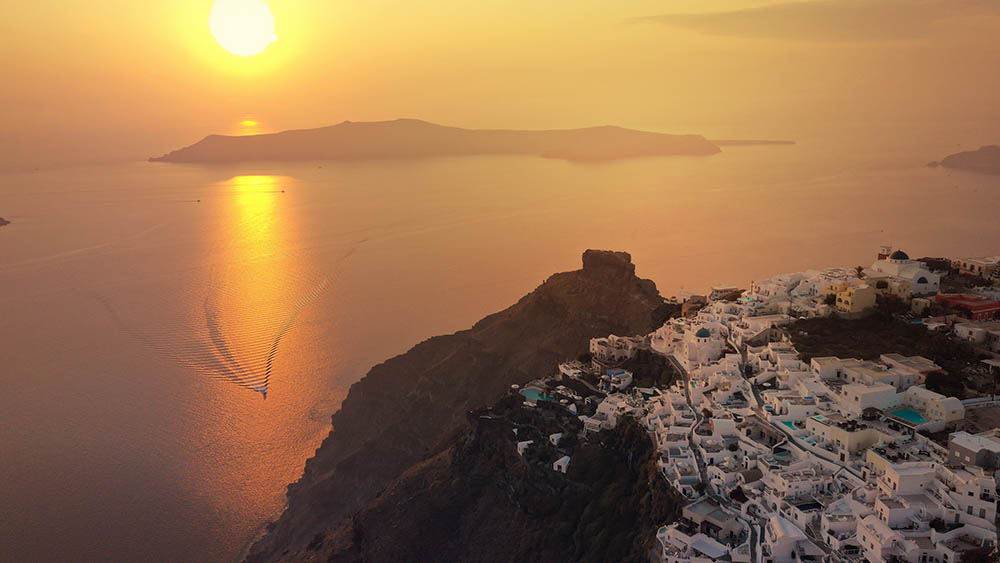 The Castle of Skaros was built approximately between 1205 and 1230 and is the oldest small castle of the island.

Without a doubt , Skaros is one of the best spots in the island overlooking the breathtaking  Caldera. It’s like a natural balcony 300 meters above the sea level.

As soon as you arrive, it’s hard to imagine that this imperial rock was once a complete small city. The eruptions of the 18th century forced the residents of Skaros to move to Fira and Imerovigli.

In the 19th century the city was almost destroyed. Today the only one saved is the church of Panagia Theoskapsti and a few residential ruins. The only proof of what the castle resembles is the well known sketch made with only a pencil by Thomas Hope.

If you Rent a Car in Santorini or a ATV, scooter,  then you should drive to Imerovigli. Once in the village you can leave your vehicle in designated places and prepare yourself for a unique walk that will take you to the Skaros Rock with the incredible breathtaking view. If you follow the path around the rock, this will lead you to the chapel at the front side.

Tip : before you go to Skaros Rock in Santorini  don’t forget to wear sneakers and have water and a hat with you.

The path to Skaros Rock

The path to reach the rock can be tricky but the view will surely reward you. You can visit  Skaros all hours of the day but avoid mid day hours as it can get quite hot and of course the sunset time is the best choice to see the famous Santorini sunset. You will also find that the stunning view is the best background for your Instagram photos.

If you want to Rent a Car in Santorini,  or rent an ATV and scooter, please do not hesitate to get in touch with our friendly team at Blue Island Rental and we would be more than happy to assist. Remember if you rent a car with us you get free millage, free drop off and pick up anywhere on Santorini Island and you can also pay on arrival.

We also offer a 10% discount if you rent your vehicle for more than 3 days.